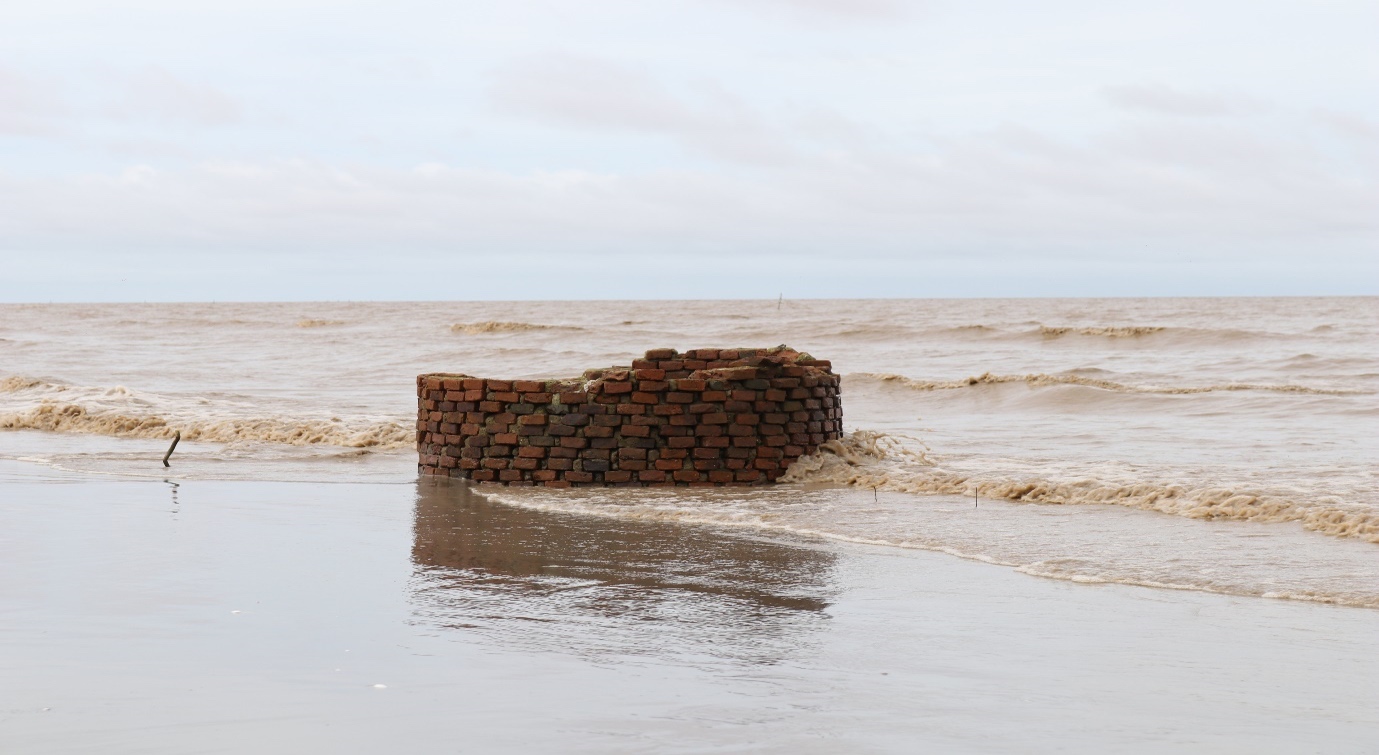 What is the problem we are trying to tackle with?
Globally three times as many people are now displaced annually because of extreme weather events and climate change than those displaced due to conflict, with the vast majority of those displaced living in developing countries,81% of whom reside in Asia.[1]The movement and planned relocation of people and communities from their homes and lands necessitated by the effects of extreme weather events and climate change is rapidly becoming one of the greatest threats to the enjoyment of human rights and to broader concerns of peace and security in Myanmar.

[1] Nansen Initiative, Climate change, cross-border displacement and human rights is there a protection gap and will COP21 help close it?’2015

A fresh water formerly located in the village of khindan, now permanently inundated

Climate displacement from both extreme weather events and climate change are set to pose a particularly dramatic challenge for the people and government of Myanmar. According to one survey, the country is currently ranked second out of 187 countries in the Global Climate Risk Index for vulnerability to climatic natural disasters. Still reeling from the effects of Cyclone Nargis in 2008, a decade on the country remains worryingly unprepared for dealing with displacement of populations which may occur as a result of climate change impacts such as rising sea levels, coastal erosion and temporary or permanent inundation.[2]A recent report has predicted that sea level in Myanmar will rise by up to 50cm by 2050.[3]Apart from some low-lying areas being permanently inundated, sea level rise will also affect season coastal flooding and storm surge intensity during cyclones and tropical storms. Additionally, rising salinity levels, salt water intrusion and ocean acidification will bring additional pressures to livelihood viability of local communities living in these affected coastal regions.

Given the scale of the crisis affecting Myanmar, the government needs to develop pro-active, appropriate preventive policies and capacities to specifically respond to climate displacement threats from both extreme weather events and future climate change. If not, millions of people may be forced to flee their homes and lands along the country’s 2000 km coastline. This potential displacement catastrophe is only further compounded when populations living along the country’s many rivers and waterways are impacted as floodplains become increasingly uninhabitable, adding to the massive displacement that has already taken place due to decades of conflict and disaster. While it is clear that millions will be affected by climate change in the decades to come, there has been virtually no vulnerability mapping or planning in Myanmar to identify at risk communities from climate displacement, nor assessments of potential locations for resettlement. It is also not clear which, if any, targeted institutions, policies or programs are in place to support these communities.

What does we do to address it? 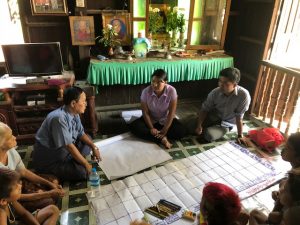 A research team from ALARM and Displacement solutions initiated a joint research project to assess the viability of establishing a land bank through two cases in the Ayeyarwaddy Delta and Paung township in Mon state. The aim of the study was to gather inputs from several coastal and rural communities highly vulnerable to the risk of climate displacement. In these locations, the perspectives of coastal communities were sought regarding potential future population movements necessitated by extreme weather events and climate change as well as the effects of climate change on current living conditions.
In the southern delta, feasibility was assessed through key stakeholder consultations, focus group discussions with villagers(2 per village, involving a minimum of 10 individuals per group, chosen in a gender-sensitive fashion) and inputs from village and township authorities .The Bogalay Department of Agriculture and Land Management Statistics were also consulted in relation to arable land use and mapping throughout the delta. Detailed sea level rise mapping was also done to assess the vulnerability of populations to climate displacement in the Ayeyarwady Delta and to demonstrate the scale of areas that could be flooded and the potential number of people that will face climate displacement. ALARM’ GIS department has undertaken a preliminary analysis of the extent of low lying areas along a 268km length of coastline in the Ayeyarwady study area and used SRTM 1DEM to extract topographic elevations and village track populations data to estimate number of people that could be effected.

The second case study was carried out in Khin Dan village in the Mon state on a small exposed coastal strip at the northern mouth of the Salween River. Khindan is one of five villages along with Ahlat, Ywarma ,Chan Thar Lay and Chan Thar Gyi which comprise the Ahlat Village Tract approximately 10 km from the Paung Township. The research team visited the village in June 2017 and April 2018 to conduct more in-depth focus group workshops and comprehensive community interviews. Interviews were undertaken with 3 household headmen and 2 focus group workshops were held over a three-day period, with participation of 11 men, 5 women and 15 children. Participatory tools were used to engage the community in focus group workshops and help them to be able to articulate their understanding of the impacts of extreme weather events and climate change to their village. The seasonal calendar tool and construction of a histogram timeline was undertaken in the local Mon language then translated to Myanmar and English. The children participated by drawing the stories told by adults on the seasonal calendar and histogram activity sheets, ensuring engagement of all community members. 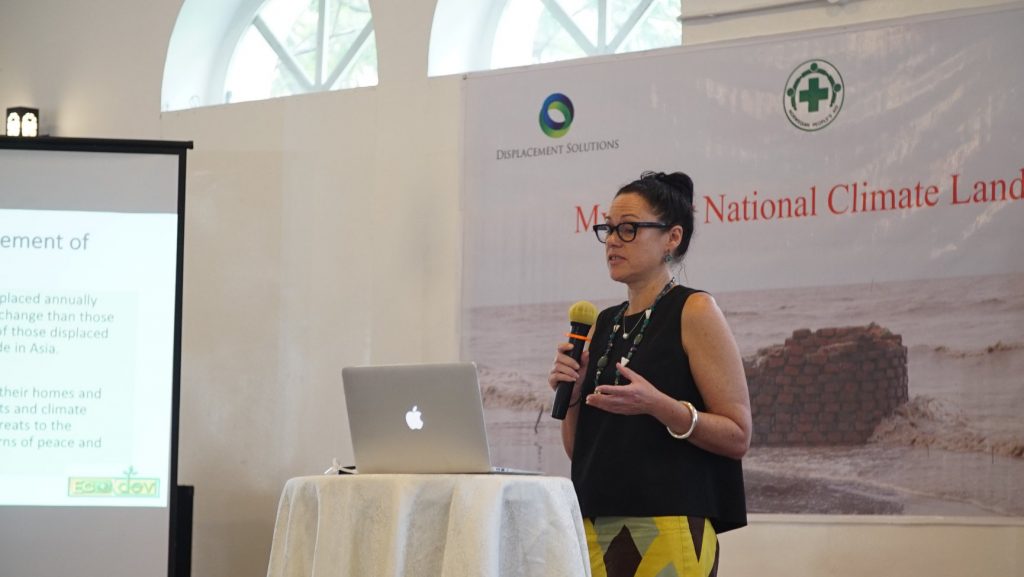 On 18th June,2018 ALARM presented the findings and recommendations of the “Establishing a Myanmar National Climate Land Bank” to the Agriculture, Livestock and Fishery Development committee of Amyothar Hluttaw. Moreover, ALARM held the report launching event at Yangon on 22nd June 2018 and invited the media , CSOs, journalists and Donors. 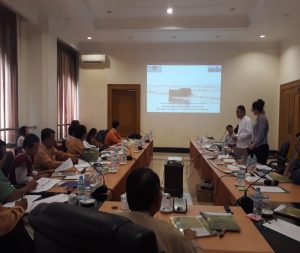 After launching the report, a lot of local and international media released the news about the Myanmar National Climate Land Bank report.(See attached Table 5).In addition, members of parliament agreed that they will raise the questions and discuss about the issues at the Upper Hluttaw meeting .Besides, U Aung Kyi Kyunt, the chairman of Agriculture, Livestock and Aquaculture development committee , told that ALARM is warmly welcomed  to present this type of research findings and recommendations which are very useful to build up the democratic federal country in future.