Advancing Life and Regenerating Motherland (ALARM) is an established, active, independent and a not-for-profit local non-governmental organization devoted to catalyzing the democratic transition and sustainable development of Myanmar through mainstreaming climate change, environmental justice and governance into the existing policy frameworks and institutions of natural resources management of the country.

Advancing Life and Regenerating Motherland (ALARM) is an established, active, independent and a not-for-profit local non-governmental organization devoted to catalyzing the democratic transition and sustainable development of Myanmar through mainstreaming climate change, environmental justice and governance into the existing policy frameworks and institutions of natural resources management of the country. It is also a registered organization in Myanmar and has evolved from a local company cum organization, namely Economically Progressive Ecosystem Development (EcoDev), established by the voluntary dedication  and collaboration  of self-conscientious Myanmar  intellectuals and scholars graduated from the Asian Institute of Technology (AIT) in 1994 in order to support the process of democratic transition in Myanmar.

During the previous decades, among many others, ALARM has played a vital role in improving environmental governance of the country including:

At present, a total of 79 permanent staff (39 Male and 40 Female) are working in its Yangon headquarters, five field offices across Myanmar (Magwe, Myitkyina, Monywa, Tanintharyi and Aungban) and two training centres (Tegyikone in Magway Region and Khone Ni in Shan State). A professional roaster is also developed for qualified local experts and technicians who are available for short term and long term (permanent/intermittent) professional works.
The annual budget of ALARM is approximately one million US dollar.

In order to realize its vision of transforming into the resilient economy and creating society adaptive to the climate challenge, ALARM has adopted the mission of enabling citizens to lead the process of change towards green growth, social equity and environmental justice. In other words, we believe that by empowering people, the society would be able to adapt themselves with the resilient and regenerative capacity to ever-increasing climate change incidences.

We value professionalism to make rational decisions in natural resources management for the interest of local and indigenous communities, to claim for and protect their resource and indigenous rights.

Although ALARM was registered in 2012, it was primarily founded as a not-for-profit private company called ‘EcoDev’ in 1994; because getting an NGO status was almost impossible under the rulership of the then military government. Since 2012, EcoDev has re-oriented and transformed itself to ALARM for better positioning as an active, independent and a full-fledged not-for-profit non-governmental organization to continue contributing to the process of democratic reform in Myanmar.
As a non-governmental group of the professionals, ALARM is being chaired by the Executive Director (ED), with the approval of a Board of Directors — a group of renown national and international scholars, experts and professionals in environmental-related thematic areas, who are working for different Institutions across the world. The Board of Directors meets at least once a year and make managerial decisions in accordance with the charter formulated by the time the organization was established.

At the operational level, there are three main sections in the organization for its day to day activities. The program section is being led by the Program Director (PD), who oversights three different programs namely the forest and land reforms (FLRP); people and environmental integrity (PEIP) and human security and decentralization (HSDP). The Admin and Finance Officer-In-Charge (AFOIC) is taking care of Admin and Finance Section, which is comprised of three departments namely finance, human resource and operation departments, it was to make sure that the activities are executed efficiently and effectively. There is also a technical section under the direct supervision of the Program Director. It is a group of the capacity building specialists, the ICT and research specialist, the GIS specialist, the M&E specialist and the communication specialist. Each section or department can elect one representative to sit in the Strategic Quality Team (SQT), which is set up at the organizational level as a check-and-balance system against the core management body, including the ED, the PD and the AFOIC.
ALARM holds its assembly every year reviewing its policies and programs and make them better in line with social, political and economic changes of the country. 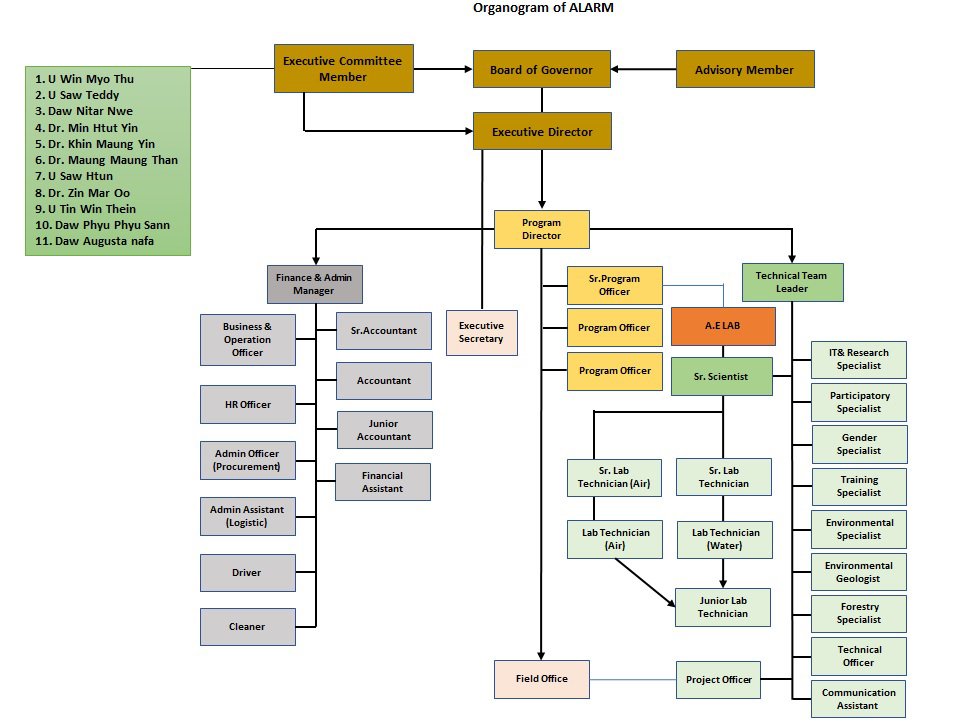