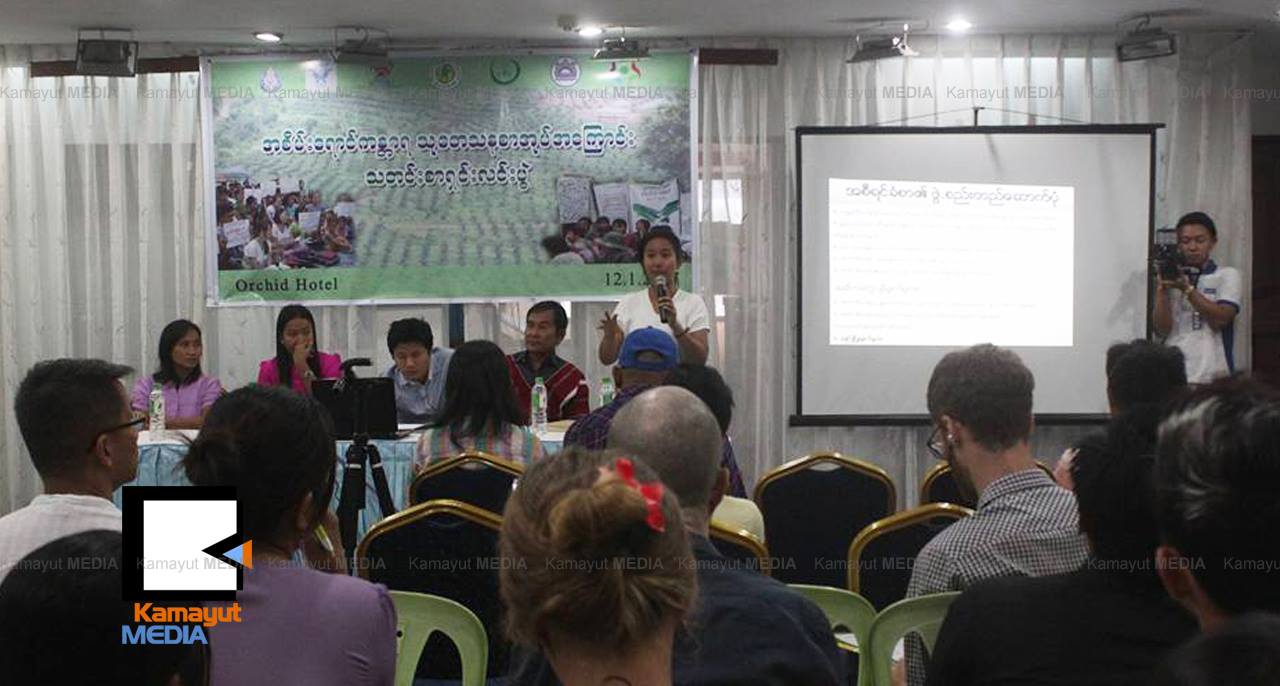 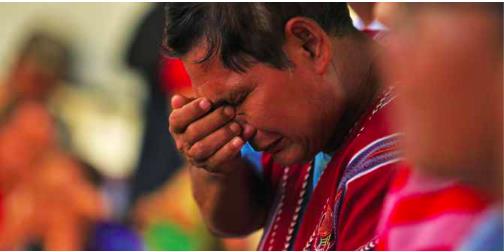 In 2011, MSPP was granted a permit by the Myanmar Investment Commission(MIC) to establish 38000 acres and $36.75 million oil palm project in Tanitharyi Township,Myeik District, Tanitharyi Region of Southeastern Myanmar. The Karen National Union(KNU) administers this area as Ler Muh Lah Township, Mergui-Tavoy District. However, lack of transparency makes it difficult to determine the actual size of the concession area. A project signboard erected by MSPP in 2014 lists the concession area as 42200 acres, while a company map from 2015 shows a concession boundary measuring 49227 acres.

MSPP is a joint venture between Malaysia-based Prestige Platform, which owns a 95% stake, and Myanmar-based Stark Industries is owned and founded by Mya Thida Sway Tin[1], a Myanmar businesswoman with connections to military and business elite.[2]Prestige Platform is a subsidiary of Glenealy Plantations, which, in turn, is a subsidiary of Sampling group ,a Malaysian conglomerate. Sampling group and Glenealy Plantations have deplorable reputations, and have been decried for environmental crimes and human rights violations. Their MSPP project is financed by Maybank, a Malaysian commercial bank that has issued $ 124 million in bonds to Glenealy Plantations. Maybank itself is financed by several international entities, including the Japan Bank for International Cooperation(JBIC), Norweigan Government Pension Fund Global(GPFG) managed by Norges Bank Investment Management(NBIM) and eight other European and North American pension funds. 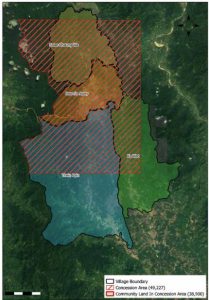 Maps showing the community land that is in MSPP concession area

The MSPP oil palm project is located in an area that has seen more than six decades of civil war between Myanmar’s central Government and the Karen National Union(KNU).Myanmar military offensives have forced indigenous Karen villagers to flee their homes multiple times, hiding out in the forest, or refugee camps in Thailand. Between 1997 and  2007 the Myanmar Army committed many human rights violations in the MSPP area, including looting and destruction of property, forced labor, rape, torture and arbitrary killing of civilians. [1]In 2012 the KNU signed a preliminary bilateral ceasefire agreement with Myanmar’s central government, which opened up former civil war zones to foreign investment. The villages around MSPP are under mixed-administration of both the Myanmar Government and the KNU, which leaves civilians vulnerable to abuse as both governments shift the blame for the oil palm plantation’s impact.

Many of the problems resulting from MSPP activities arise from poor Government land use planning that failed to reflect reality on the ground. Due to civil war and displacement, indigenous Karen villagers have never been able to register their lands with either the Myanmar government or the KNU, leaving them vulnerable to dispossession. The MSPP concession also overlaps with the proposed boundary of Tanitharyi National Park, allowing the company to destroy forest in an area of high biodiversity and important tiger habitat.

MSPP activities have caused severe negative social and environmental impacts for four indigenous Karen Villages, home to approximately 4480 people, within the concession area, and in total 13 villages are affected. Especially, villagers like Swei Chaung, Bawh Sa Nwae, Ka Wae and Thein Pyin villages lost their orchards and village owned lands. Therefore, proper and systematic documentation is needed to measure the lost areas or land grabs or given up land with the participation of local community with the purpose of sharing the collected data or information among the villagers, community leaders, community based organizations, civil society organizations and advocating to the decision makers of authorities to do the needful and appropriate campaigns. Since 2011, the company has cleared more than 6000 acres, including the betel nut and cashew orchards villagers depend on for their livelihoods. Families who have lost their productive land have fallen into high levels of debt or been forced to work as day laborers for low wages. Many villagers do not earn enough money to feed and clothe their families. Furthermore, run-off form chemical fertilizers and pesticides used by MSPP has polluted local water sources, causing livestock to die and villagers to fall ill with skin irritations and dysentery. MSPP has never offered villagers fair compensation for these impacts.

The MSPP oil palm project has failed to comply with both domestic law and international human rights principles. Following the granting of the MIC permit, MSPP should have acquired permission from the Central Committee for the Management of Vacant, Fallow and Virgin Lands to use the relevant land. There is no evidence that it did so. Further, because the land belonged to the communities, the only way that it could have been acquired is under the 1894 Land Acquisition Act. This would have required a public notification process and opportunities to raise objection, neither of which took place .MSPP has also violated the indigenous Karen community’s right to Free Prior and Informed Consent(FPIC)[1] enshrined in the United Nations Declaration on the Rights of Indigenous Peoples(UNDRIP).[2]

What did we do to address it?

ALARM altogether with 11 local organizations conducted the MSPP land grabbing study for about 18 months and mixed methods included focus group workshop, individual interviews , Remote Sensing Technology and ground truth survey were used. After conducting the study on Myanmar Stark Prestige Plantation’s agricultural land grabbing for oil plantation, ALARM launched the report with the purpose of how the company grabbed the lands, how the local communities are affected by land grabbing and how basic human rights are abused by the company on 12th January 2017.This event took place at the presence of 18 media groups, international organizations, direct community representatives and other interested individuals. There was a half day of press release in Orchid Hotel, Yangon under the title of “Green Desert: Communities in Tanintharyi Renounce in the MSPP Oil Palm Concession”. There was also a regional level report launching organized in Dawei on 22nd January 2017. Having launched the reports, a continuous follow-up of the report was made by organizing a series of meeting with key stakeholders such as respective authorities including Myanmar Investment commission, the NLD Central Economic Committee, the Chief Minister and other Ministers of Tanintharyi Region, national and regional parliaments to draw their attention and accordingly seek their supports. In addition, ALARM also organized a Media Trip (DVB, Myanmar Times, Eleven media group, Thanlwin Hket) on February 9, 2017 to Tanintharyi and Myeik Townships for latest update of MSPP Company. The citizen jury committee consisting of the local community, company, relevant government departments and members of parliament were also formed to solve the land grabbing problems.

After launching the report of Green Desert, members of Myanmar National Human Rights Commission (MNHRC) visited the Myanmar Stark Prestige Plantation Company(MSPP) in Tanitharyi Township, Myeik district, at the request of the Malaysian Human Rights Commission. During the inspection, the MNHRC discovered a totally different picture of what the MSPP had claimed from November 19 to 22 about a complaint that it was bullied by local communities and stopped from developing the land the company had already bought. As a result, the company tried to make compensation to those farmers, who have lost their lands for the plantation. Besides, the in-charge of the company, Mr. Hussian Ismail (Plantation Controller) committed that ‘the company had stopped on the land clearing operation on January 26, 2017 until further notice by the government or authorities. One highlighted point is that the Citizen Jury Committee was well being formed with regional Member of Parliaments, relevant government departments, MSPP , CSOs and affected community people in order to solve the land issues among the MSPP Company and affected community. 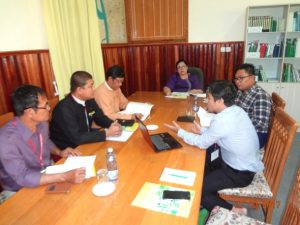 As the MSPP follow up activity, the meeting with Chief minister of Tanitharyi Region was held at regional government office building of chief minister office to discuss about MSPP land grabbing case on 27th February 2017.The response by the Chief Minister, Daw Lei Lei Win, she has ordered to announce and publish in the newspaper  for the unused or unplanted area back to the government so that the government can do other projects or return to the original owner or whoever is interested in making use of the land. Moreover, Parliament’s Investigation Commission is formed to do the investigation first and now waiting to put up the case to regional parliament. Consequently, she promised that she will act on the issue directly talking to Mr. Myint San and from one Map project and will work hand in hand with One Map team to build on the correct data of plantations and land utilizations. After receiving the accurate data or information, I will handle and solve this case. 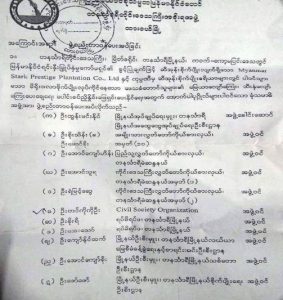 MSPP report follow up-Company committed on 12th July 2016 that they would stop expansion of Oil Palm plantation area. However, they are still expanding the plantation area. The company bought 220 acres in total from two individuals in Kyauk Sate Village. On the other hand, the villagers (total 12 individuals/ households to be specific) from the current affected villages did not get compensation as yet but they were scare to voice out their rights since local KNU Representative and Member of Parliament threatened them and gave verbal pressure on them. Moreover, Member of Parliament argued that the compensation of the losses, which the villagers proposed, is more than the normal or local price. Currently, CSO partners decided to do more community mobilization, use more combined effort to coordinate and advocate for getting the compensation and stop/question on the spot for further expansion of land clearing.On 22nd June,2018, ALARM together with local CSOs held the meeting to present the circumstances of the oil palm companies at Tanitharyi Region at the meeting hall of regional government. 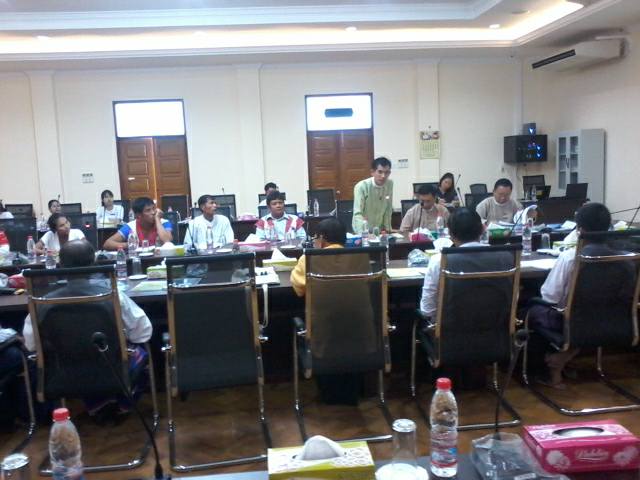 Publication of media articles about issues expressed at the conference has been recorded so far.(See attached Table 2)